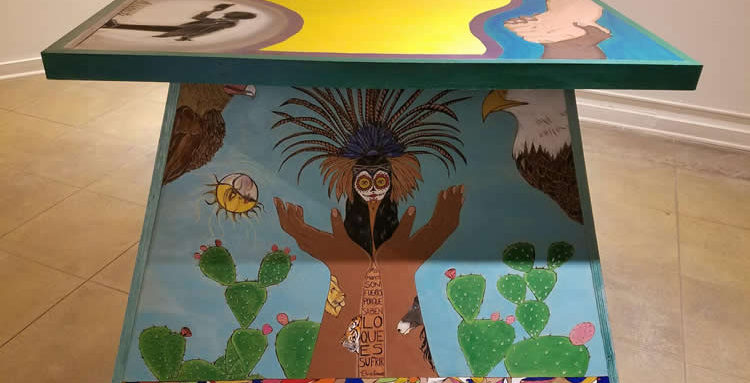 This year, the festivities will include an art exhibit on Thursday, March 23, at the Riverside Art Museum (RAM), showcasing entries into the annual César E. Chávez Visual Arts Competition. Winners from the competition will be announced at Friday’s breakfast, which begins at 7:30 am in the College’s Student Academic Services Building.

The art exhibit, which opens to the public at 6 pm, will showcase all of the art submissions. A sponsor reception will be held at 5 pm.

The competition is open to current MVC students and local high school students from Moreno Valley and Val Verde Unified school districts. Students can submit work in art, photography, audio, or sculpture, as it relates to Chávez who, with Dolores Huerta, founded the National Farm Workers Association (later the United Farm Workers union (UFW) in 1962.

“We realized it would be a phenomenal opportunity to offer students an art-based platform to honor Chavez, while simultaneously honor our students’ work by exhibiting their creations in a museum,” noted Bonavita Quinto MacCallum, Ph.D., associate professor and Chair of the César E. Chávez organizing committee. “We’re excited to have the support of RAM in furthering the education experiences of our art students in the greater Inland Empire.”

Attendees at the Friday breakfast will hear from local Corona-native John Zarate, a friend and host of Chávez during his march from the Coachella Valley. Also, a Riverside-based artist, Cynthia Huerta, will discuss her Community Altar Project. Huerta and a team of community members, including students from the College, recreated the altar used in the mass when Chávez broke his 25-day fast in 1968. The original altar was created by Colorado artist Emanuel Martinez and depicts intricate images and icons of La Causa and the Mestizo heritage of Chicanos. The altar, which will be on display at the breakfast, honors Riverside’s local communities and cultural strengths.