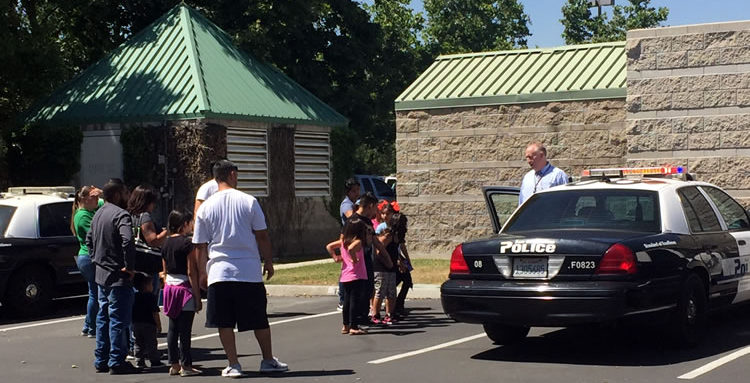 ABOVE: Parents and kids get an up close and personal look at a SBPD police vehicle, lights and sirens included!

San Bernardino, Ca – On Monday afternoon, students from Northpark Elementary and their parents got a behind the scenes look at the Police Department to better understand how the police help out children like them during an emergency. Northpark parents reached out to the Department early last week in hopes of exposing their kids to the positive side of law enforcement and helping them understand that police officers are the “good guys.” The Department was more than happy to oblige.

Kids started the tour by meeting K9 Sherlock, the Department’s newest addition to Community Affairs, and their tour guide, Lt. Tim Crocker, who heads up the Investigations Department. With the Sherlock in tow, the elementary kids walked through the station, met several officers and detectives, learned some history about law enforcement, and were shown police cars lit up with lights and sirens. Kids were able to ask questions and interact with officers on a personal level which showed the children how much the officers really care about their safety. The tour lasted about an hour and ended with lots of cuddles from Sherlock!