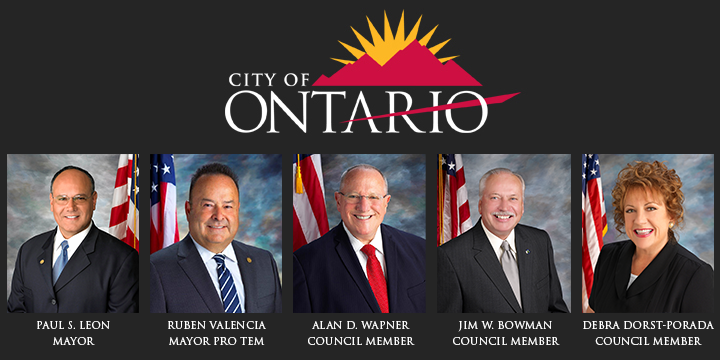 Ontario, CA – Ontario’s Mayor and City Council have unanimously appointed Ruben Valencia to serve as Mayor pro Tem in 2019 for a one-year term.

Valencia, a Los Angeles County deputy sheriff who was elected to the Ontario City Council in November 2016, was selected as Mayor pro Tem during the Council’s meeting on Tuesday, January 15.

“This is a tremendous honor to serve as Mayor pro Tem for my community, which I have called home for over two decades,” Valencia said. “I look forward to working with Mayor Paul Leon and the City Council as we continue to work together in our ongoing mission to make Ontario a place more people want to call home.”

Since his election to the Council, Valencia has worked toward improving the lives of at-risk teens by launching the Youth Activities League of Ontario. The group pairs at-risk students with positive mentors in the community. Students also participate in a variety of activity classes such as golf.

Valencia succeeds Council Member Alan D. Wapner, who served as Mayor pro Tem for the past year. Wapner has been instrumental in regaining local control of Ontario International Airport and currently serves as President of Southern California Association of Governments.

“This past year has been an honor to serve Ontario in the capacity of Mayor pro Tem,” Wapner said. “We made many accomplishments possible because of our unified efforts to benefit our growing community.”

During the meeting the unanimous motion also called for Debra Dorst-Porada to serve as Mayor pro Tem in 2020.

“Last night, we as a council secured leadership in the Mayor pro Tem role for the next two years,” said Mayor Paul S. Leon. “I am confident we will all work cohesively and continue our goal of making Ontario a family-friendly community.”

“I believe Mayor pro Tem Valencia will serve our community well in 2019,” said Councilman Jim W. Bowman. “We will all build upon the momentum created in the previous years and in 2020 Council Member Debra Dorst-Porada will serve as Mayor pro Tem.”

“I am looking forward to working with my colleague as we continue our work on making Ontario a great city,” said Council Member Debra Dorst-Porada.