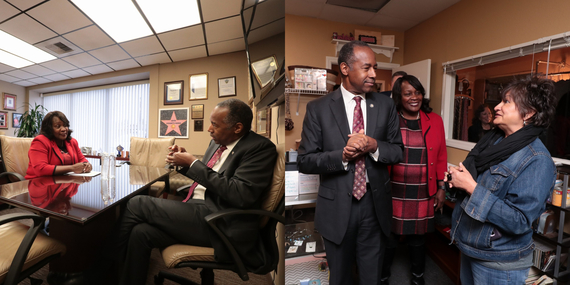 U.S. Secretary of Housing and Urban Development Ben Carson Visits the City of Fontana to Meet with Mayor Warren and Discuss Opportunity Zones

Fontana, Calif. – U.S. Secretary of Housing and Urban Development Ben Carson visited the City of Fontana earlier today (Wednesday, February 20, 2019) to walk through one of the City’s opportunity zones – areas that have potential to spur economic development.

“The opportunity zone programs provide much needed capital to revitalize areas that would not otherwise be revitalized,” stated U.S. Secretary of Housing and Urban Development Ben Carson. “As you start to see development, other people will come in.”

As Chairman of the White House Opportunity and Revitalization Council, Secretary Ben Carson received a tour of the CityLink Water of Life Community Church located within the opportunity zone. The Water of Life Community Church currently receives funding through the Department of Housing and Urban Development (HUD)’s Emergency Solutions Grant to provide valuable resources such as rent assistance, a food pantry, a thrift store and a mobile medical clinic.

“People have a mechanism whereby to manifest the goodness of their hearts by making donations…by volunteering,” shared Secretary Ben Carson. “That’s what America is about.”

“It was an honor to welcome Secretary Ben Carson into Fontana, and personally sit down with him and those on the forefront of housing development to discuss investment-related ideas and projects for our City,” stated Mayor Warren. “Great things are happening in Fontana.”