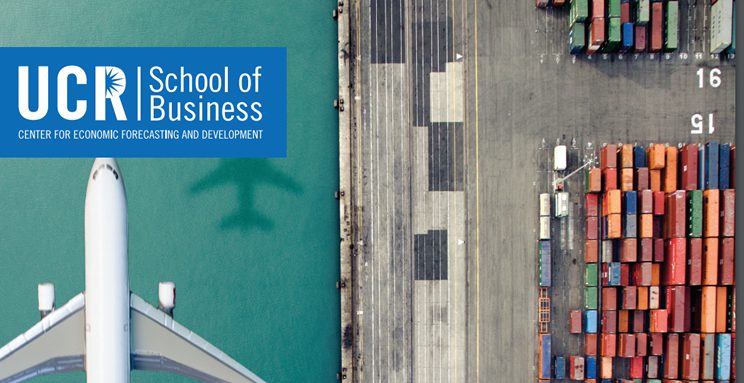 The latest Inland Empire Business Activity Index shows business activity in the region continuing along a steady growth trajectory despite ongoing clashes between the U.S. and some of its major trading partners.

RIVERSIDE, Calif. — Business activity in the Inland Empire grew at a steady pace in the second quarter of 2018 and is expected to continue its expansion in the near term future despite trade disputes with China and others, according to the newly released Inland Empire Business Activity Index. The Index, which draws on employment and other data, finds that the region’s business activity expanded at a 2.6% annualized rate in the second quarter of 2018, a slightly faster level of growth than during the first quarter (2.2%) but lower than U.S. GDP, which grew by 4.1%. 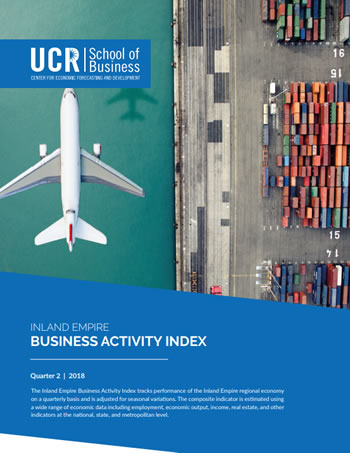 Looking ahead, the Center for Forecasting anticipates business activity in the Inland Empire to increase between 2.5% and 3.0% in the third quarter of 2018.

“The spurt in GDP growth nationally during the second quarter was due in part to an acceleration in financial and IT services, which are not prominent in the Inland Empire compared to the nation as a whole,” said Robert Kleinhenz, Executive Director of Research at the Center for Economic Forecasting and one of the index authors. “Still, if you consider the Inland Empire’s business activity along side its record-low unemployment rate and job growth that is outpacing the rest of Southern California, it becomes pretty clear that the local economy is on solid footing.”

Kleinhenz also notes that the Inland Empire is an area heavily dependent on the logistics (trade and transportation) industry and the longer term outlook is clouded due to uncertainty about where current trade disputes might lead. “In the short term, however, things remain positive and our outlook is calling for continued growth throughout the remainder of this year,” he said. The Center for Forecasting anticipates business activity in the Inland Empire to increase between 2.5% and 3.0% in the third quarter of 2018.

The Index tracks performance of the Inland Empire regional economy on a quarterly basis and is adjusted for seasonal variations. The composite indicator is estimated using a wide range of economic data including employment, economic output, income, real estate, and other indicators at the national, state, and metropolitan level. The Index is produced entirely by the UC Riverside School of Business Center for Economic Forecasting and Development.

The University of California, Riverside (www.ucr.edu) is a doctoral research university, a living laboratory for groundbreaking exploration of issues critical to Inland Southern California, the state and communities around the world. Reflecting California’s diverse culture, UCR’s enrollment is now nearly 23,000 students. The campus opened a medical school in 2013 and has reached the heart of the Coachella Valley by way of the UCR Palm Desert Center. The campus has an annual statewide economic impact of more than $1 billion. To learn more, call (951) UCR-NEWS