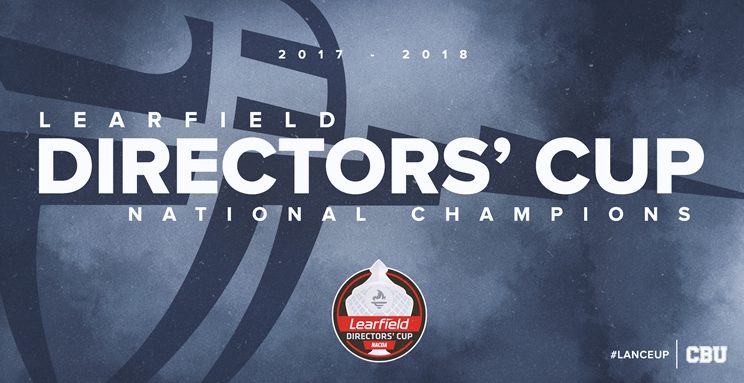 Riverside, Ca. – California Baptist University earned the right to say it went out victorious when the Learfield Directors’ Cup announced the Lancers finished atop the NCAA Division II standings in 2017-18, their final season as a D-II member, on Thursday morning.CBU will be honored for its victory at the 2018 National Association of Collegiate Directors of Athletics (NACDA) Convention during the Learfield Directors’ Cup Awards Luncheon on Saturday, June 30th. The Lancers will begin their transition to Division I and the Western Athletic Conference in 2018-19.“Our entire athletic department is humbled and blessed to be recognized the Learfield Cup champion,” said CBU Director of Athletics Dr. Micah Parker. “We could not have done this without the support of our administration.”In CBU’s first year as a fully-fledged NCAA member, it debuted at 26th in the final D-II Cup Standings for 2014. The Lancers moved up to 16th in 2015, fourth in 2016 but then left themselves little room to move up after taking second in 2017, which set the stage for CBU’s historic final goodbye to Division II on Thursday.“Our student-athletes, coaches and staff rose to the occasion by improving each year to make this happen.  We have so many talented and driven people in our department – each striving to be the best at what they do.  I’m very proud of our team,” Parker concluded.Points for the Learfield Directors’ Cup are awarded based on each institution’s finish in NCAA Championships, with 268 D-II schools logging at least one point. Complete standings and the scoring structure can be found on NACDA’s website at www.directorscup.org.Fifteen of the Lancers’ 18 NCAA-sponsored sports qualified for the postseason in 2017-18, with eight being represented at the Division II Championships and securing top-14 finishes.Women’s golf and men’s swim/dive tied for the top finish in Division II in school history as the national runner-ups. Seven more teams placed in the top 10: women’s cross country and wrestling took third, men’s cross country came in fifth, men’s basketball won the West Regional and was one of the last eight teams standing in D-II and women’s swim/dive ended up 10th, while men’s golf added a top-14 performance for CBU.A dramatic comeback in the spring pushed the Lancers up from second to first place in the Learfield Directors’ Cup. Grand Valley State held a 78.75-point lead over CBU (958.75-880) in the latest Learfield update on May 31, with only baseball left to be counted.The Lancers baseball team qualified for the postseason and reached the West Regional semifinal, while Grand Valley State’s team missed out on the playoffs altogether. Learfield’s updated scoring system counts all scores for men’s and women’s basketball, baseball and women’s volleyball. Additionally, only up to 11 other of the highest scores are included in the final score.It was enough to shoot CBU to the top of the standings with 905 points, a 70.25 advantage over runner-up Grand Valley State (834.75).

CBU in the News