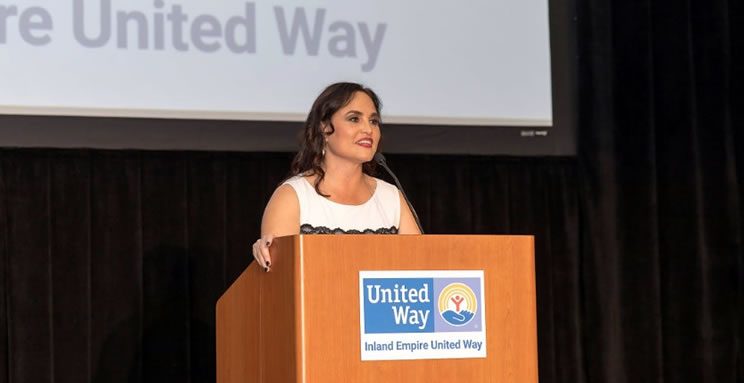 Pomona, Ca – The Inland Empire United Way (IEUW) held its 8th Annual Challenge for Children Gala this past Thursday, February 28, 2019 at the Sheraton Fairplex Conference Center in Pomona. The glamorous event transported attendees to the golden era of film with dinner, silent auction, live entertainment, and many other attractions to raise funds for in-house programs that focus on assisting Inland Empire children in need.

This year’s gala featured vintage delivery vehicles provided by the presenting sponsor, UPS, which was also honored as the Community Champion of the Year for their continual support in bettering the Inland Empire. Bank of America received the Financial Torch Bearer Award, University of La Verne was named the Education Pioneer, and Inland Empire Health Plan received the Health Trailblazer Award.

The evening featured a brief introduction to what IEUW programs do and who they help. Live Oak Elementary School Principal, Patricia Corral, spoke about the school makeover that the school received in 2018 and noted that less behavioral office referrals had been recorded since. ieVolunteers is one of six in-house programs that make a positive impact on Inland Empire children. IEUW works to provide local children in need with the tools necessary to succeed, including everything from food over the weekend to interview prep workshops. The fundraising portion of the event was incredibly successful and achieved over $30,000 alone. Attendees were encouraged to give via text message if they felt drawn to a particular program. Additionally, the event surpassed sponsorship contribution of all previous years.

IEUW Acting CEO and President, Shirli Driz said, “Our donors felt like Stars from the impact they made as their pocketbooks opened and the donations poured out to help our children in need.  By joining us with your support, you are ensuring Inland Empire United Way is able to continue our important community-building work and stay connected to our mission and community programs.  We couldn’t accomplish all we do without you, our wonderful staff, and endless community volunteers who relentlessly give their time.” The Old Hollywood theme was completed with a performance from Hollywood Revisited, who put on a wonderful show featuring vintage costumes from Hollywood movies.

Inland Empire United Way is committed to improving the lives and futures of children and families in need by investing in Education, Health, and Financial Stability. We are proud that contributions given local, stay local and an impressive 88% of every dollar is invested in direct program activities. By partnering with a network of local nonprofit organizations, United Way delivers critical services to our community, connects individuals in crisis with needed resources through 2-1-1, and increases the power of local charities by providing dedicated volunteers.https://www.ieuw.org