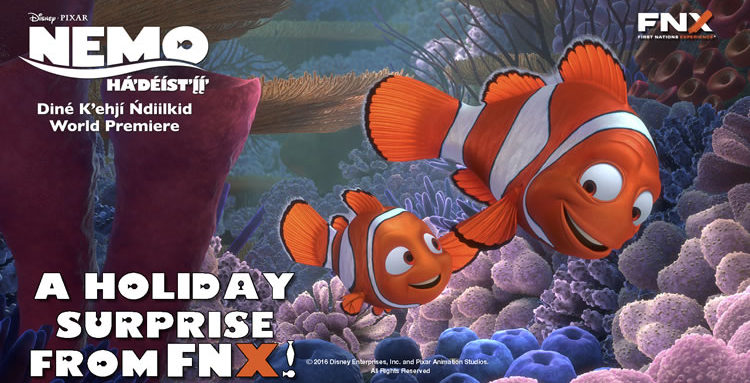 “Finding Nemo” will be first major film to debut on TV in Navajo, airs Christmas Day

San Bernardino, CA– First Nations Experience (FNX), which originates from the studios of KVCR-PBS in the San Bernardino Community College District, announced today that the Oscar-winning film “Finding Nemo” will make its television broadcast debut translated in the Navajo language.

[ecko_quote source=”Locke Wasler CEO of Schoen Wasler Group”]There’s so much more we want to do within Native America, and this is just the beginning. Multi-platform broadcast and distribution agreements will make that possible,[/ecko_quote]

FNX is the first and only nationally distributed TV channel in the U.S. exclusively devoted to Native American and World Indigenous programming and is carried by 20 affiliate stations in 20 states from Alaska to New York and available to more than 23 million households across the United States.

The historic broadcast agreement between Disney·Pixar is the first of its kind between any Native American television channel and a major Hollywood studio. Karin Schoen Wasler, managing partner of Schoen Wasler Group, said she is proud to be an integral part of it. “When we started building Schoen Wasler, our goal was to promote Native American projects so as many people as possible can access them. Working with FNX, a voice and broadcast outlet for indigenous programming, was a natural fit.”

After months of negotiations with Disney·Pixar, Locke Wasler CEO of Schoen Wasler Group secured approval for FNX to broadcast ‘Nemo Há’déést’į́į́’ and he sees this as the first of many such agreements with major studios. “It’s a start. There’s so much more we want to do within Native America, and this is just the beginning. Multi-platform broadcast and distribution agreements will make that possible,” he said.

Frank Blanquet, chief content manager for FNX reflected on the significance of dubbing the 2003 blockbuster into Navajo. “This historic partnership between FNX-PBS, a major Hollywood studio and an American Indian Tribe will set precedence on the importance of indigenous language preservation and revitalization.”

The Navajo Nation has about 300,000 members, and its reservation is the largest in the U.S.

“FNX is a model for diversity in television content and we’re thrilled that Disney·Pixar sees the value and importance of providing us with this historic broadcast opportunity. It’s a stunning achievement for public television and only appropriate that it happen on FNX. It will be a memorable occasion for millions of people across the country to enjoy this special FNX Christmas Day broadcast with their families,” added Alfredo Cruz, general manager of KVCR/FNX.

“Finding Nemo” is the second major motion picture to be dubbed by the Navajo Nation, after the successful translation of “Star Wars Episode IV: A New Hope” in 2013.

Multilingual fans – including those who can speak whale like Dory – are encouraged to catch the historic occasion this Christmas Day on FNX.

First Nations Experience (FNX) is the first and only nationally distributed TV channel exclusively devoted to Native American and World Indigenous content. FNX originates from the studios of KVCR-PBS in the San Bernardino Community College District in California. Created as a shared vision between Founding Partners, the San Manuel Band of Mission Indians and KVCR-PBS, FNX launched on September 25, 2011. FNX broadcasts in the second largest media market in the U.S. to an estimated audience of over 18 million viewers. Through Native-produced and/or themed documentaries, dramatic series, nature, cooking, gardening, children’s and arts programming, FNX strives to accurately reflect the lives and cultures of Native American and Indigenous people around the world. Learn more at: www.fnx.org