Riverside, Ca. – The current Inland Empire Business Activity Index is now available, and it shows that in the 2nd quarter of 2017, the region’s business activity increased at a 2.4 percent annual rate over the 1st quarter while U.S. GDP increased 2.6 percent. 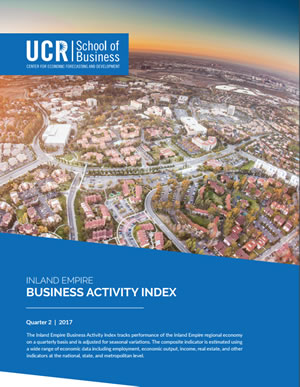 [ecko_quote source=”Robert Kleinhenz, Executive Director of Research at the UCR School of Business Center for Economic Forecasting and Development. “]“The impressive increase in construction activity in the Inland Empire is a very welcome trend on levels beyond the boost it gives to employment”[/ecko_quote]

Business activity in the Inland Empire has sped up and is almost on par with U.S. gross domestic product (GDP) growth, according to an Inland Empire Business Activity Index released today by UCR’s School of Business Center for Economic Forecasting and Development.

The local construction industry has been one of the major drivers of the Inland Empire’s recent rise in business activity, having seen a robust jump in building permit applications. Permitting activity grew by double digits during the first half of 2017 with single family, multifamily, and commercial building permits in the region approaching or surpassing post-recession highs.

Consequently, employment in the IE’s construction industry surged in the 2nd quarter and as of July 2017 (the most recent data available), had increased 16.5 percent over July 2016.

According to the analysis, the growth rate of the Inland Empire’s total employment has slowed compared to 2016 primarily because the region has reached ‘full employment’. Across the state, the tightening labor market is strongly connected to a lack of available housing and escalating prices that are further burdening households.

Looking ahead, the Center for Forecasting anticipates business activity in the Inland Empire to increase by approximately 2 percent over the second half of the year, a lower rate of growth than indicated in the first edition of this Index due to the slowing in the labor market.

The Index tracks performance of the Inland Empire regional economy on a quarterly basis and is adjusted for seasonal variations. The composite indicator is estimated using a wide range of economic data including employment, economic output, income, real estate, and other indicators at the national, state, and metropolitan level. The Index is produced entirely by the UC Riverside School of Business Center for Economic Forecasting and Development.